Being informed about the warning signs of suicide can help to support those around us who may be thinking about suicide. Here are some suicide warning signs. 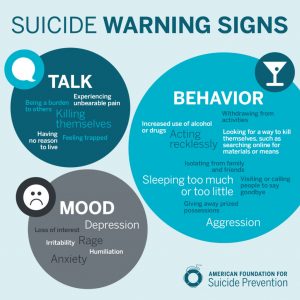 It’s difficult to talk to someone who you think is suicidal, and it’s hard to know what to do to help a loved one who is suffering. Taking action is always a good choice, and asking about suicidal thoughts or feelings won’t push someone to harm themselves. Letting someone talk about their feelings may reduce the risk of acting on suicidal feelings and can help.

According to the Mayo Clinic, the first step is to find out whether the person is in danger of acting on suicidal feelings. Be sensitive, but ask direct questions:

You don’t have to do this alone!

If you are feeling suicidal or know someone who is at risk of suicide, get help from a trained professional as quickly as possible.