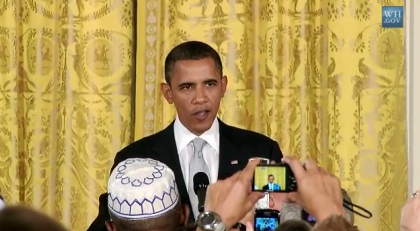 President Obama released the nation’s first comprehensive National HIV/AIDS Strategy four years ago to help reduce the number of new infections and increase access to care to everyone affected, regardless of class or status.

The strategy envisions that “the United States will become a place where new HIV infections are rare and when they do occur, every person, regardless of age, gender, race/ethnicity, sexual orientation, or socio-economic circumstance, will have unfettered access to high quality, life-extending care, free from stigma and discrimination,” according to a post on the aids.gov blog.

To further the initiative, on July 15, 2014 the Department of Health and Human Services will make available $11 million to enhance the Community Health Centers’ HIV efforts in communities particularly affected by HIV/AIDS, especially for racial and ethnic minorities.

Earlier in 2014, the President announced the National Institutes of Health was redirecting $100 million in funds to develop new therapies toward a cure along with making it a priority to develop a vaccine.

The Department of Justice also recently released a Best Practices Guide to Reform HIV-specific Criminal Laws to Align with Scientifically Supported Factors. The National HIV/AIDS Strategy notes that many state criminal laws have not kept up modern medical knowledge, and criminalizes activates the Centers for Disease Control and Prevention knows poises no or negligible risk for HIV transmission.

The new best practices push for scientifically supported guides to HIV-specific criminal laws to ensure policies “do not place unique or additional burdens on individuals living with HIV/AIDS.”

Many current laws criminalize non-disclosure of positive status while engaging in behaviors such as sharing needles, while engaging in sex work (regardless of risk of the act), or during the commission of a sex crime. Many state laws also bar those with known HIV-positive status to engage in consensual sexual activities without disclosing their status.

Other acts such as biting, spitting or the throwing of bodily fluids by individuals who know they are HIV-positive is also illegal, especially when those acts involve law enforcement. Instead, the new best practices push to only criminalize those who internally infect others with HIV/AIDS.

The new guidelines are meant to reduce the sigma related to those living with HIV/AIDS, which is seen as a significant barrier for people to seek testing. According to CDC stats, 1 in 6 with the virus are unaware of their status.

The strategy sees testing for HIV/AIDS as a critical element in reducing new infections. So now screening persons between 15 and 65 years of age is a grade “A” recommendation for the United States Preventive Services Task Force.

Check out the aids.gov blog for more details on how the U.S. government is planning to fight HIV/AIDS and actions it’s taken in the past four years to improve the lives of those infected.

“So fighting HIV/AIDS in America and around the world will require more than just fighting the virus,” Obama said in the press conference announcing the plan in 2010. “It will require a broader effort to make life more just and equitable for the people who inhabit this Earth. And that’s a cause to which I’ll be firmly committed so long as I have the privilege of serving as President.”

“So to all of you who have been out there in the field, working on this issues day in, day out, I know sometimes it’s thankless work. But the truth is, you are representing what’s best in all of us – our regard for one another, our willingness to care for one another. I thank you for that. I’m grateful for you. You’re going to have a partner in me”