PODS® for Pads with Alchemist Theatre 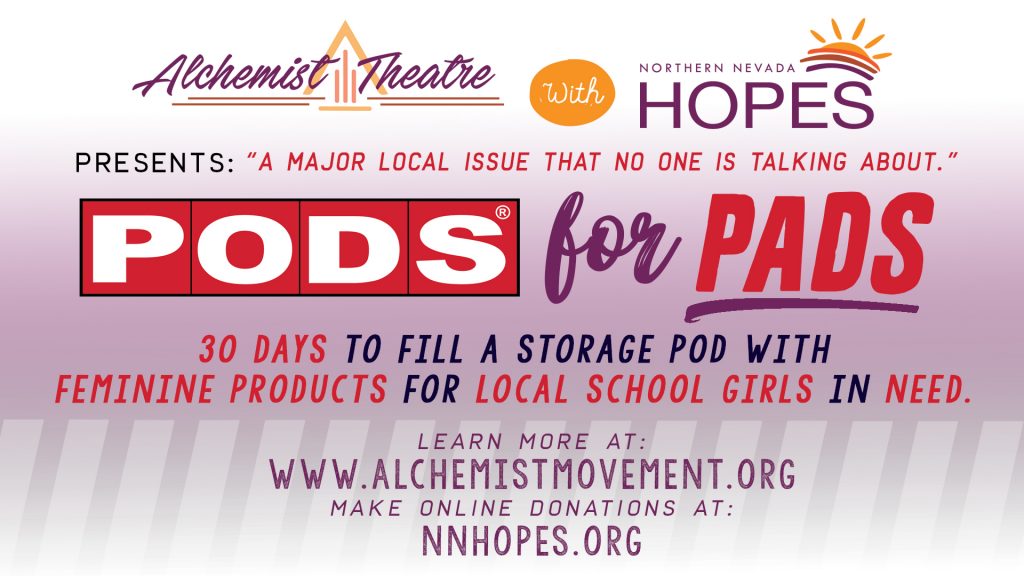 On September 20th, 2017, Alchemist Theatre combines forces with Northern Nevada HOPES to present “PODS for Pads” – a project that hopes to fill a large, 8×8 storage POD with feminine products for local schoolgirls in need. The two organizations, along with official partners Our Center, Reno Initiative for Shelter and Equality, The Eddy House and Women and Children’s Center of the Sierras, hope this project will not just procure resources for local students in need, but also create a conversation around the issue as a whole. Donations can be made during business hours at HOPES, as well as at any of their “satellite drop off locations”, whose information is available at www.alchemistmovement.org. Additionally, supporters can make tax-deductible donations online at nnhopes.org. The POD, located at HOPES on 580 W. 5th St, will be open from 3-6pm on Fridays for in-person donations. This grand endeavor will be launched live at Alchemist Theatre’s September show, and close a few days after their October show. The project creators will utilize social media to create a buzz, spread the word, and update followers on progress of the mission. Donations will then be sorted, counted, and delivered to Title I schools in Washoe County, based on need assessed by their school nurses.

“This is a massive problem that absolutely no one is talking about,” says Christopher Daniels, co-creator of Alchemist Theatre and former sex educator with Planned Parenthood here in Reno. Christopher will be working with HOPES to create a “Community Conversation”, featuring a panel of local experts, teens, and parents. The goal is to educate citizens about the issue, as well as create discussion around why this is an unmet need within the community. This event will take place in the Community Room at HOPES some time in the project’s duration; the exact time and date is currently to be determined.

Alchemist Theatre collaborators first heard about the problem in 2014 when a local hair stylist started collecting feminine pads after one of her clients, a local high school teacher, confessed she was buying her own and sharing them with her girls, who were often missing school for days every month due to lack of access. Quickly, the Alchemists began researching and found that, though this problem is huge on a local level, there are absolutely no statistics or well-known resources for the many low-income families in Washoe County with school-age girls. Alchemist Theatre, HOPES of Northern Nevada, and all of their non-profit partners know this one project will not solve the problem, but are optimistic they can spark change through action and education, which is what true alchemy is all about.